The multiple aspects of the concept of Kallos in the everyday life and the philosophical discourse of ancient Greece are presented in the major, emblematic, archaeological exhibition of the Museum of Cycladic Art, titled “ΚΑLLOS. The Ultimate Beauty” and will run until the 16th of January 2022.

Kallos is an ideal developed in ancient Greek thinking and was expressed through the verses of the epic (8th century BC) and lyric (7th – 6th century BC) poets, initially as outward beauty. From the sixth century BC onwards, the concept was crystallized gradually through the texts of the philosophers, who referred to Kallos as a combination of physical appearance and virtues of the soul. It is on this dimension of Kallos that the exhibition of the Museum of Cycladic Art concentrates, enhancing the contribution of ancient Greece to defining the notion of beauty that prevails to this day.

In this exhibition, Kallos is conveyed through a vast wealth and variety of antiquities, such as statues, vases, sherds (broken ceramics), mirrors, jewellery, perfume vases, accessories of the toilette and beautification (cosmetic unguents, pigments, and so on), objects of clay, stone metal and terracottas of various periods, mainly Archaic, Classical and Hellenistic figurines, tools for styling the hair, such as iron scissors, little combs, and so on.

Τhis exhibition displays three hundred emblematic antiquities from fifty-two museums, collections, and Ephorates of Antiquities throughout Greece, as well as from Italy, and the Vatican. The overwhelming majority appear for the first time outside of the museums of their provenance. They meet and mingle in the Museum of Cycladic Art, so as to give an integrated picture of the ideal of Kallos, inadequately translated into English as Beauty.

The geographical provenance of the objects was selected on the basis of specific criteria: the exhibits come from all over mainland and island Greece, so as to emphasize the participation of most of the cities of Greek Antiquity and the diffusion of the concept of Kallos to all sectors of society. The exhibition also hosts a corresponding number of antiquities from Magna Graecia, enabling the visitor to comprehend the phenomenon of the dispersion of the notion of Kallos also to the Greek colonies in the West.

In the introductory section of the Exhibition, specific exhibits annotate various aspects of Kállos: the Sphinx from Mycenae, as a prehistoric prelude to the notion of beautification; Aphrodite and Apollo, divine symbols of female and male beauty; the poetess Sappho (7th – 6th century BC), one of the first extollers of beauty in its ultimate manifestation; Penelope in front of her loom, eternal symbol of moral beauty; Herakles and Geras, the pinnacle and the decline of beauty; and the coupling of opposites – good and evil, beautiful and ugly.

With the generous support of L’Oréal. 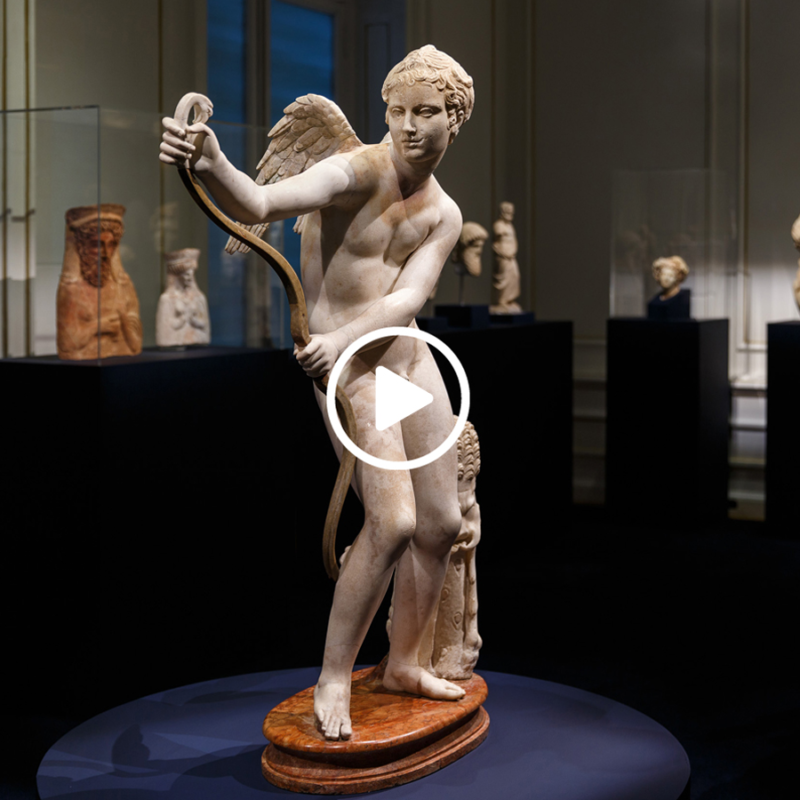 Three hundred emblematic antiquities from fifty-two museums, collections, and Ephorates of Antiquities throughout Greece, as well as from Italy, and the Vatican.

The overwhelming majority appear for the first time outside of the museums of their provenance. They meet and mingle in the Museum of Cycladic Art, so as to give an integrated picture of the ideal of Kallos, inadequately translated into English as Beauty. 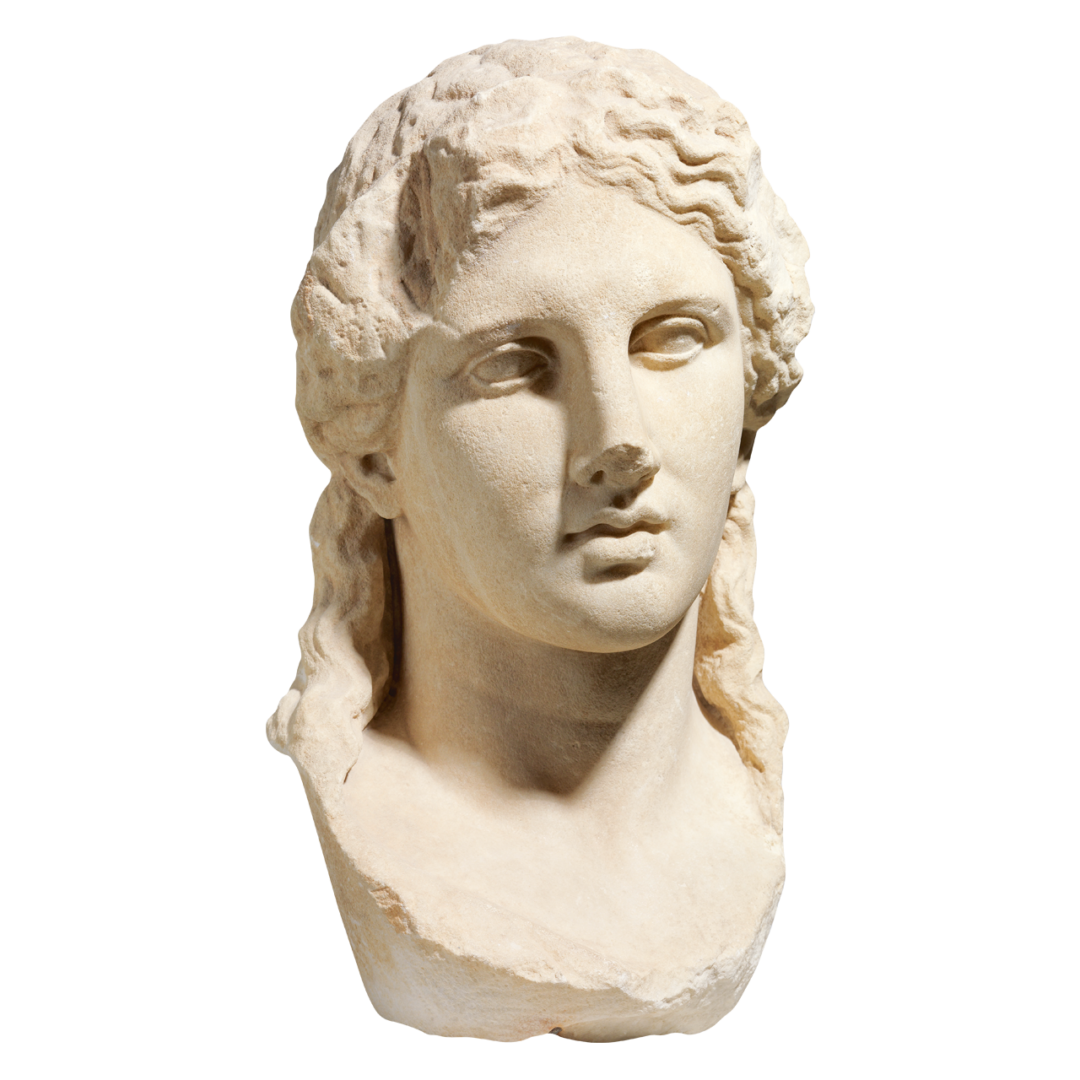 Beauty comes always from the gods, who possess it in the ultimate degree. Even the most beautiful humans are considered as equal in beauty to the gods and never surpass them. 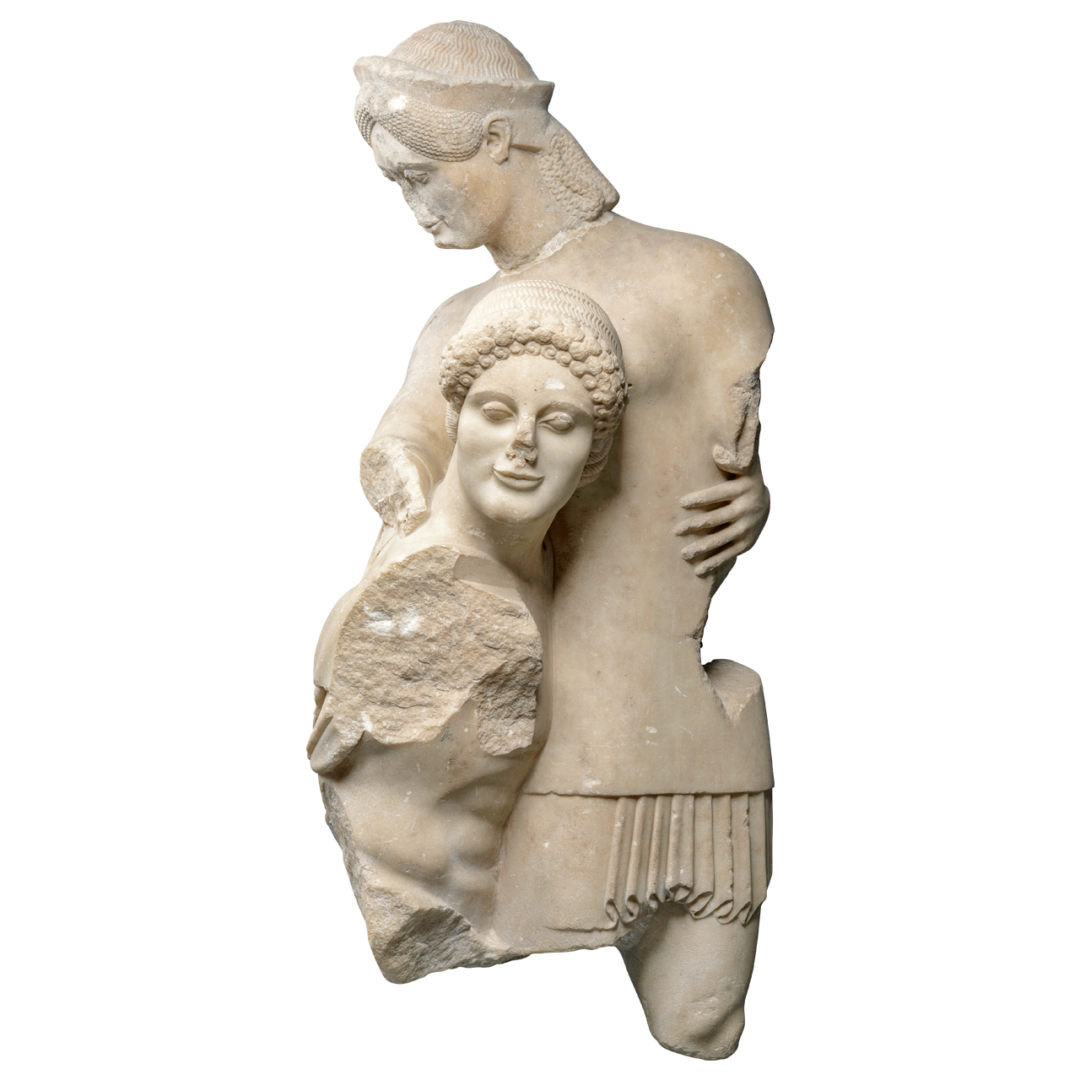 The attraction of the beauty of lovely mortals leads gods and heroes to pursue them, to abduct them and to lie with them or to possess them forever. Abundant are the references in myths to such cases: Zeus and Ganymede, Theseus and Antiope, and so on. 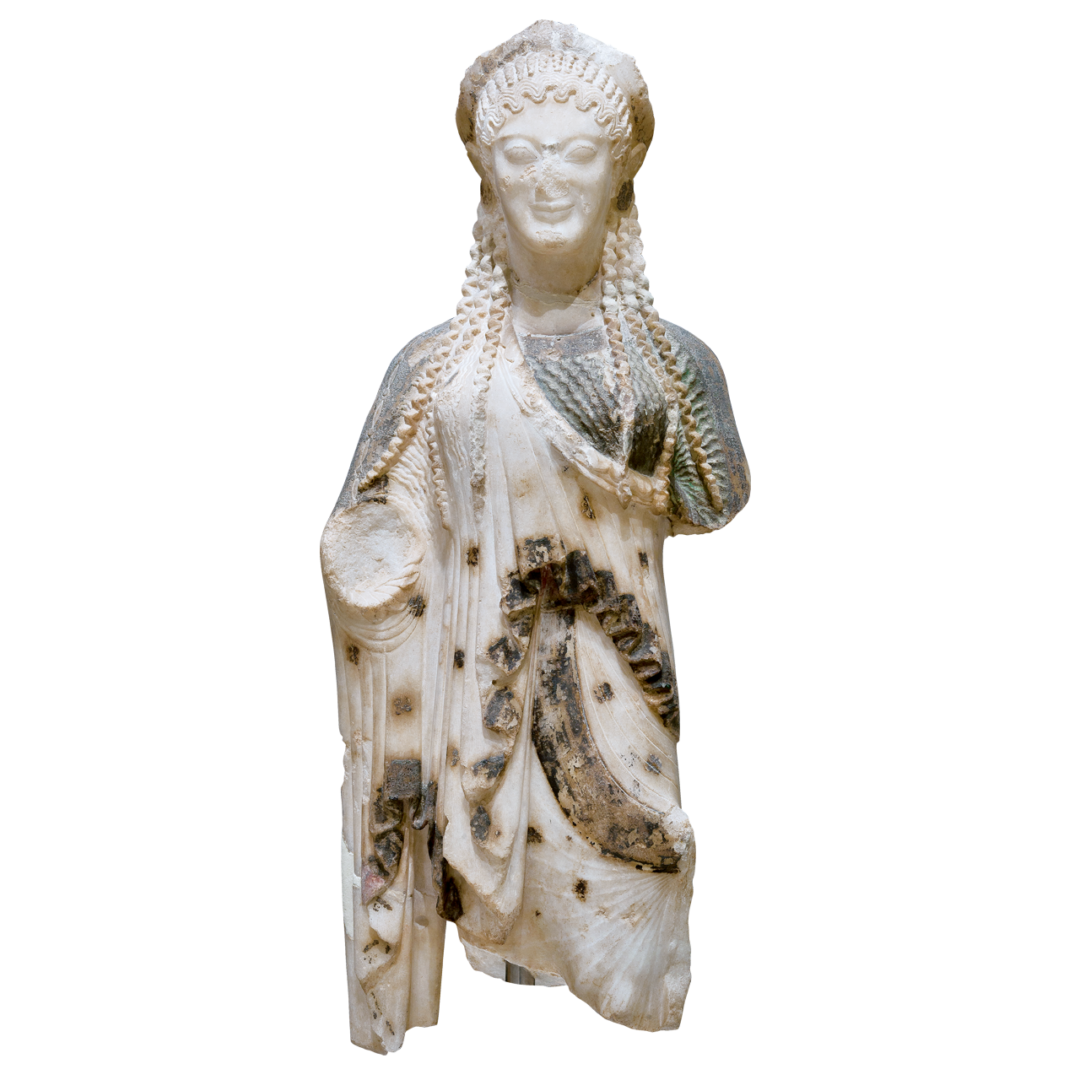 Kallos, as a concept that overarches physical beauty and virtues of the soul, begins to take shape in ancient Greek philosophical thinking during the Archaic period (6th century BC) and subsequently during Classical (5th – 4th century BC) and Hellenistic times (3rd – 2nd century BC). Conveyed through a series of works of superb art, mainly sculptures, of the Archaic and Classical periods is the representation of the human figure but also its ethos. 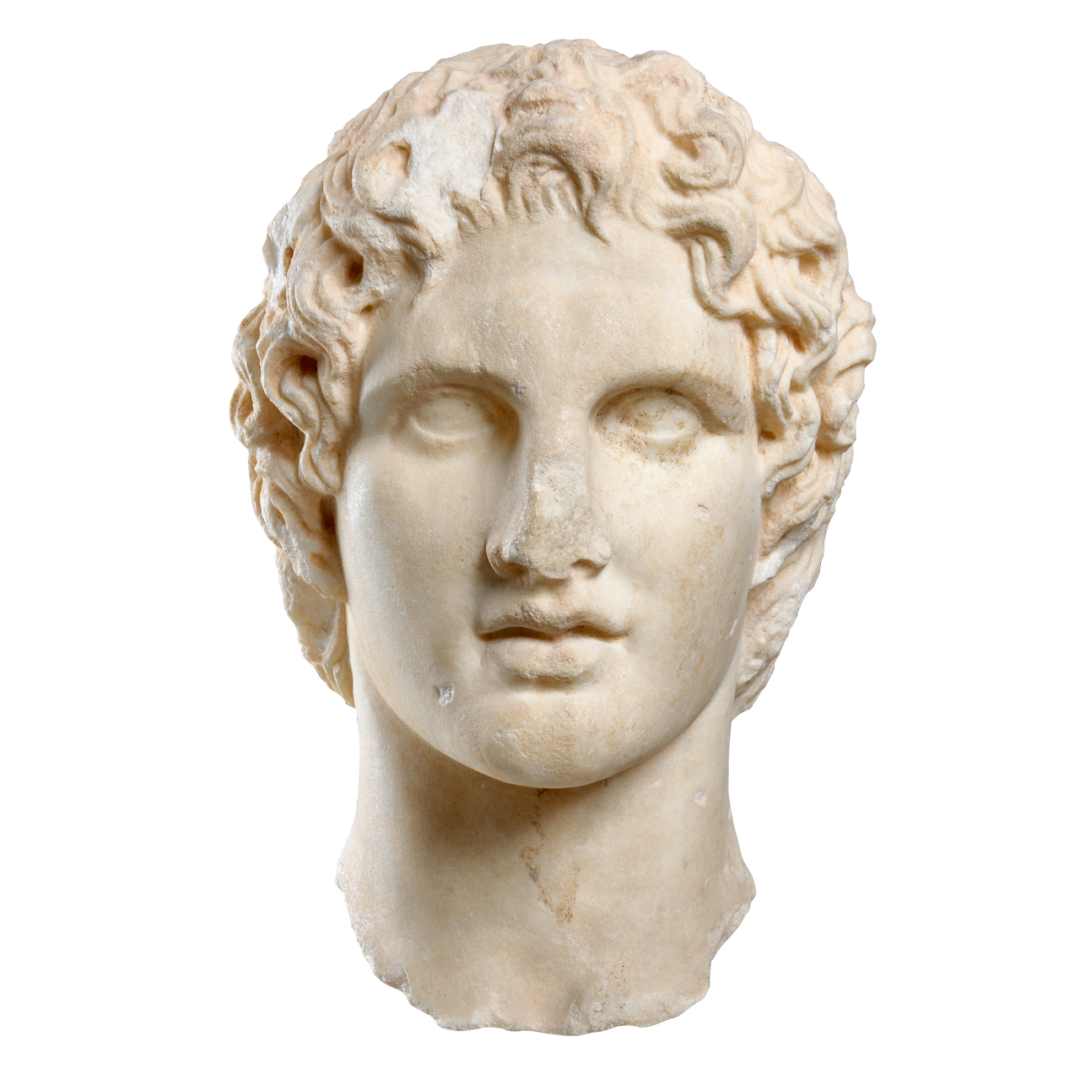 In ancient Greek thinking, beauty of humans exists in every age and thanks to this many mortals became immortal. Mythical, but also actual figures of antiquity, famed for their physical beauty, such as Adonis, Fair Helen (of Troy) on the one hand and Alexander the Great on the other, together with anonymous mortals of everyday life, make up this unit. 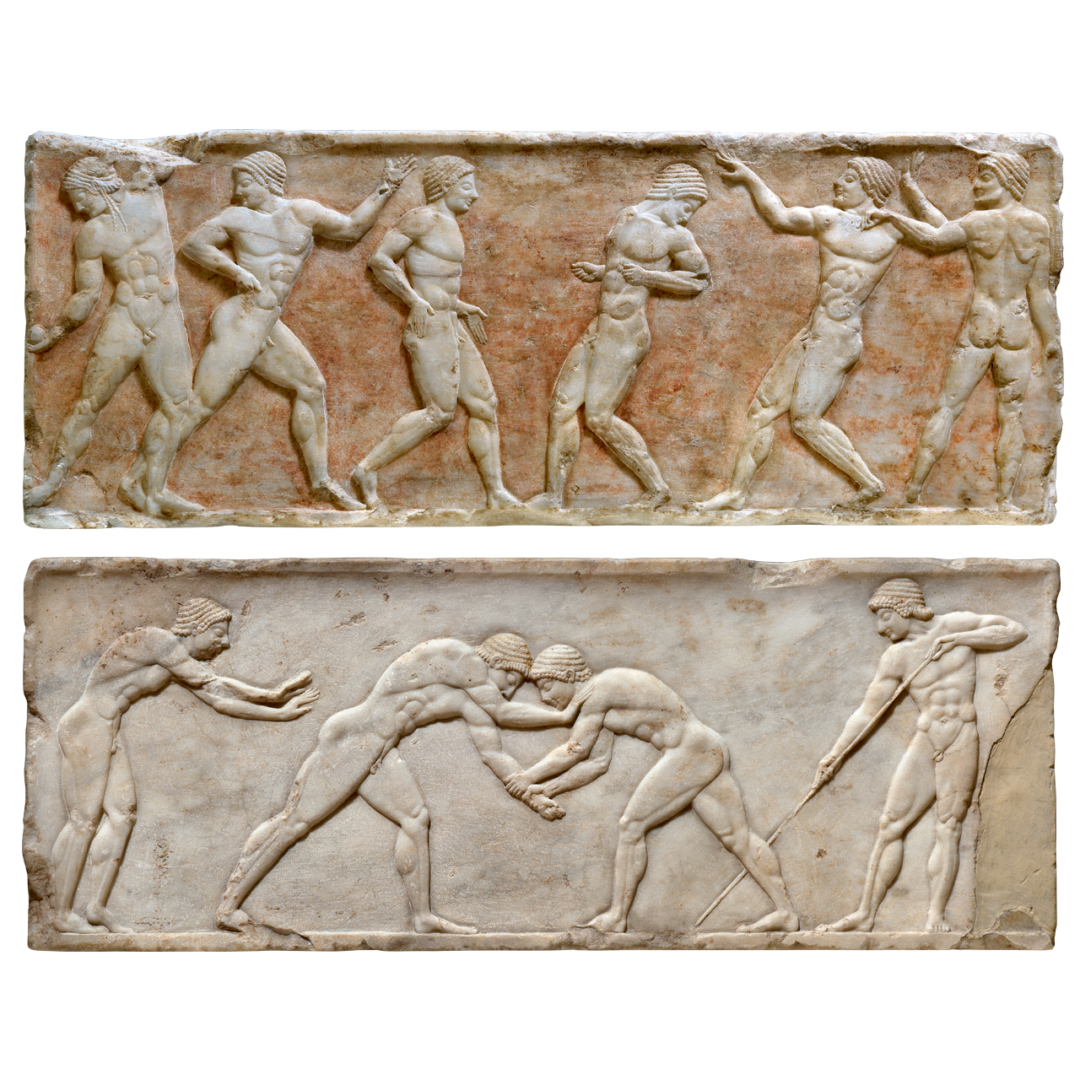 Displayed here are works in which physical and mental strength and vigour are uppermost, making man capable of coping with the difficulties and the demands of athletic contests, in combination with noble competition (“fair play”) and his admirable achievements on the running track. Heads of athletes crowned with victory wreaths, together with gymnasium scenes and accoutrements of athletes are featured. Exceptional among the exhibits is an Archaic base of a Kouros statue with superbly carved representations of activities in the gymnasium. 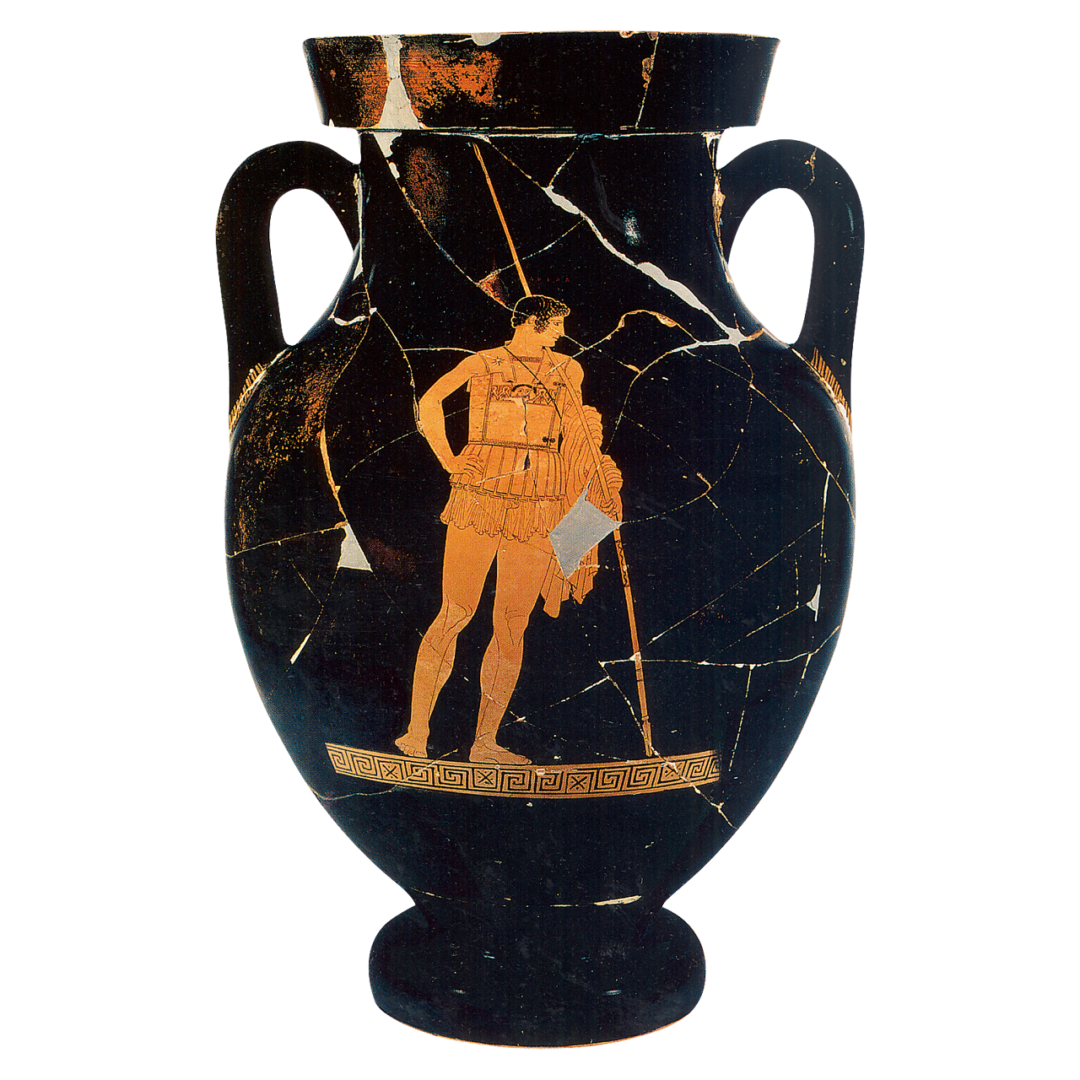 This unit showcases the spirit of self-sacrifice for the common good, acts of heroism in wartime and peacetime, sometimes in combination also with physical beauty. The heroes are on a higher plane than common mortals and frequently become demi-gods. 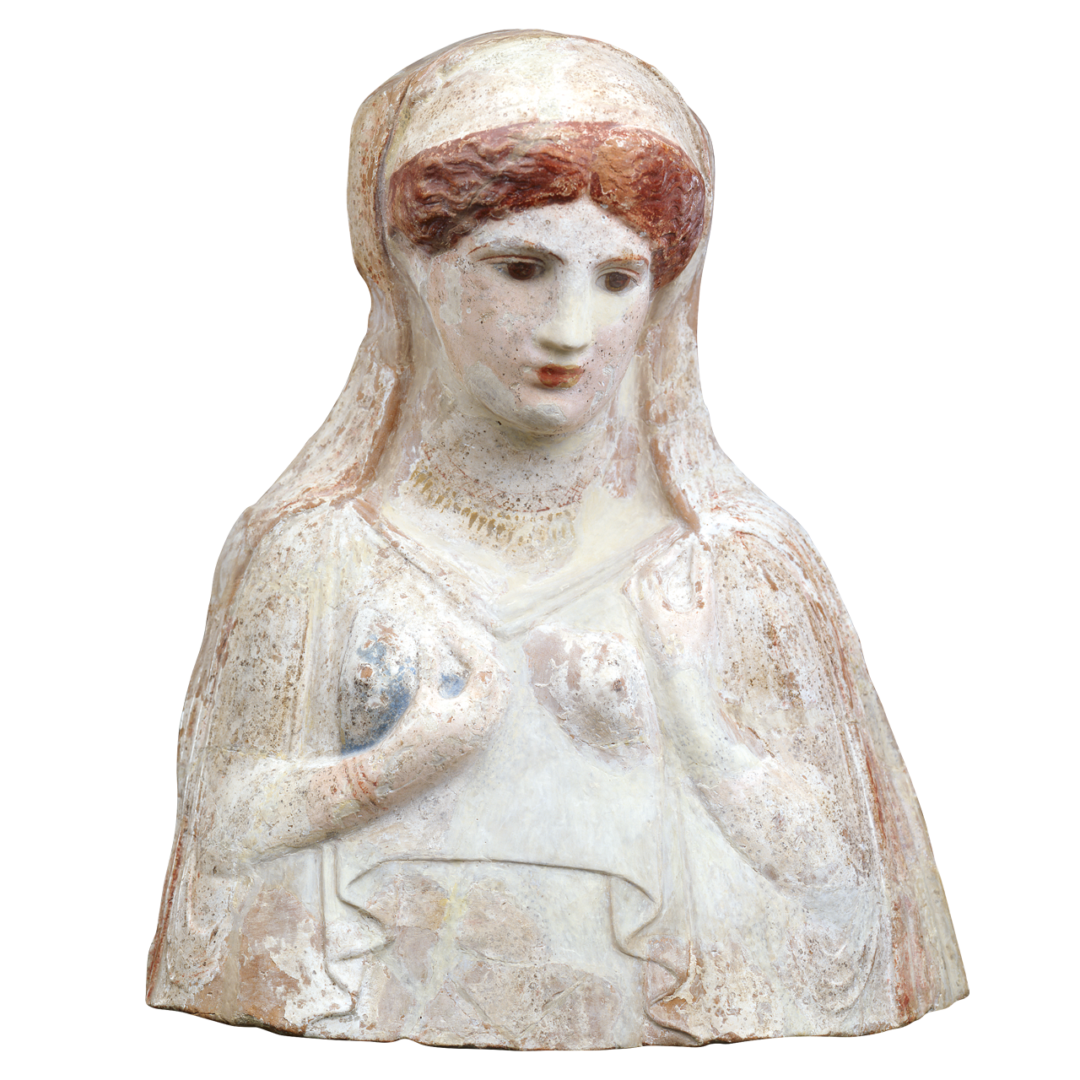 This unit displays a unique array of objects used in daily life. It follows the Homeric description of Hera’s toilette, the procedure of beautification in all its stages, from the bath, the anointing of the body with perfumes and unguents, the care of the face and the body, the hairstyle, even the attire and adornment with jewellery 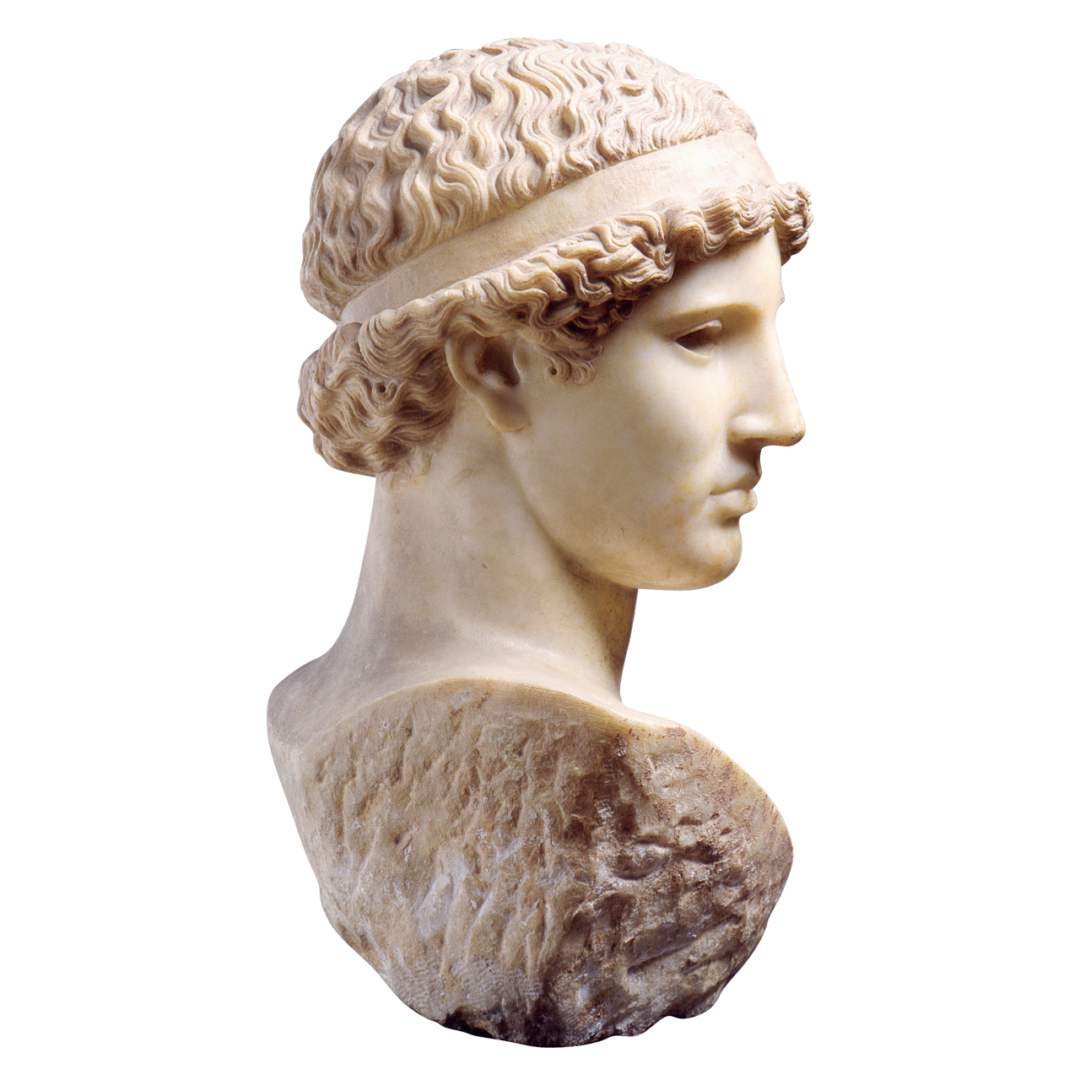 Paris, prince of Troy, is called upon to decide which goddess is the most beautiful and to give her an apple as victory prize. The competition is won by Aphrodite, goddess of beauty, who promises to give to Paris the most beautiful mortal woman in the world, Helen, queen of Sparta 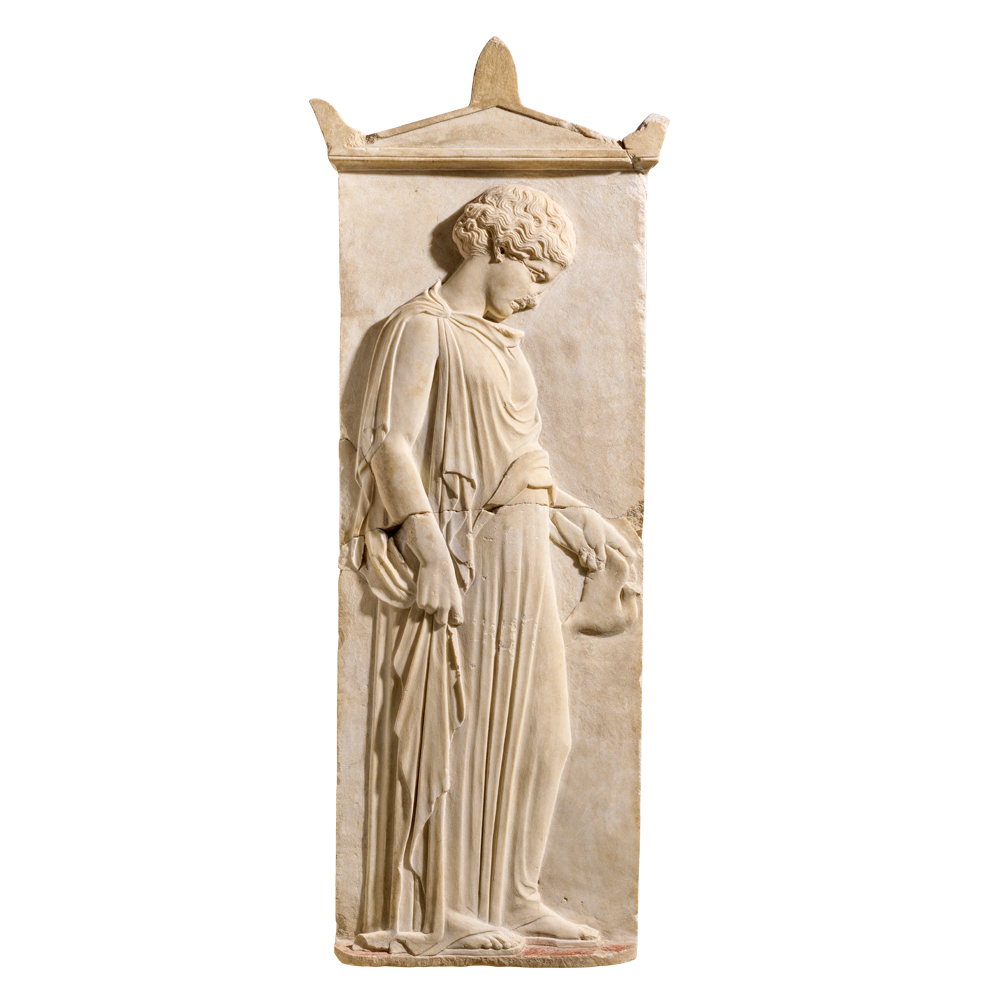 Youths in their prime, their “finest hour” are described in ancient Greek as Ωραίοι» (Horaioi, which is translated as lovely and has as root the word ώρα [hora] meaning hour). Those whom fate decreed should depart this world before reaching their “finest hour”, who die an untimely death are qualified as άωροι (a[h]oroi = before their “hour” or prime). Two grave stelai, one Archaic from Akraiphnion in Boeotia, and one Classical of a young girl from Kallikrateia in the Chalkidike, converse in a unique coexistence in the same space. 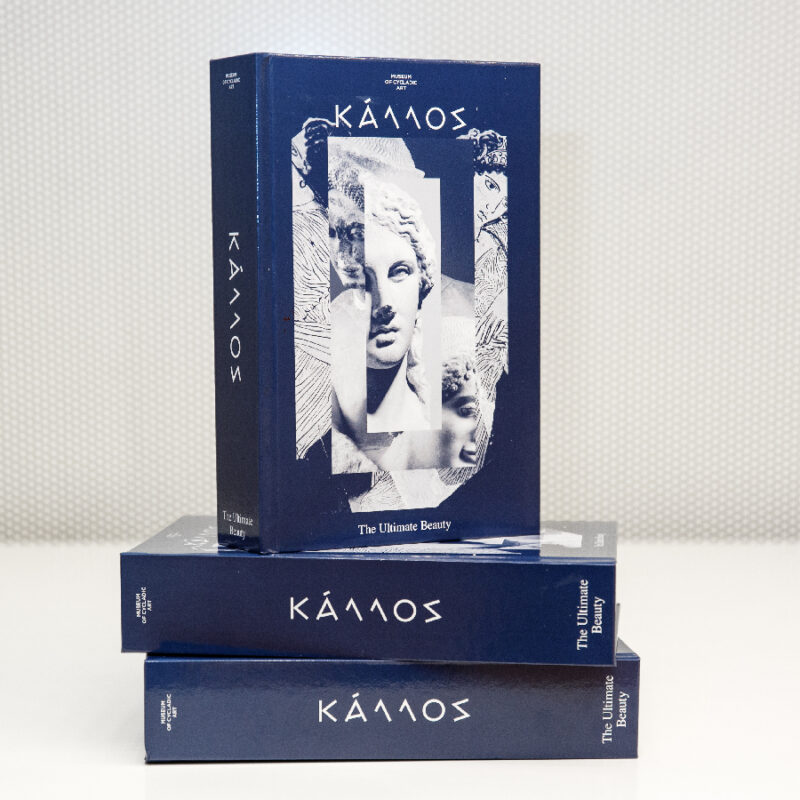 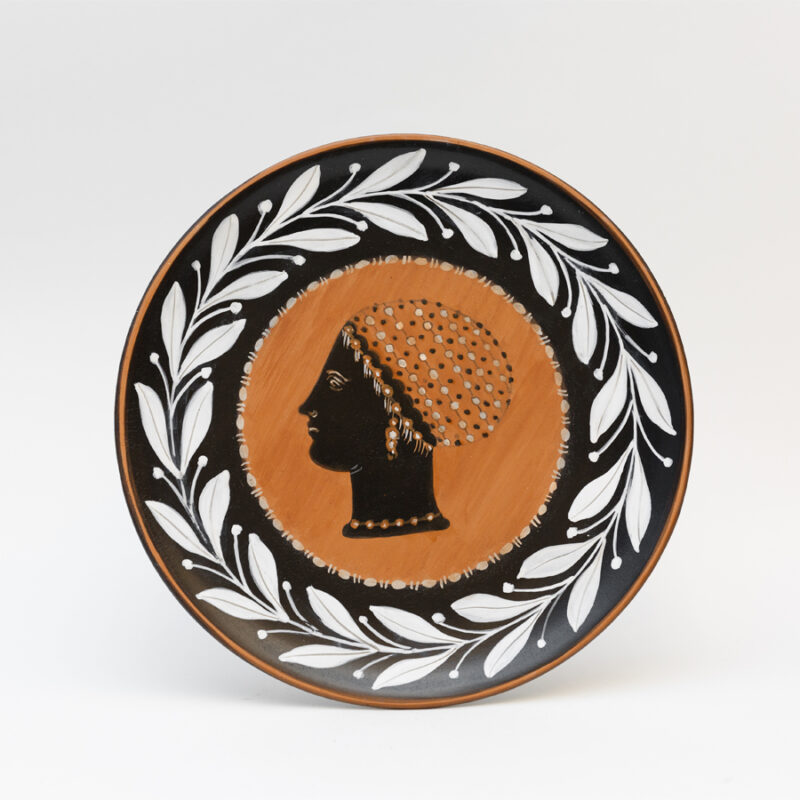 Items Exclusively Designed in Celebration of the Exhibition
Cycladic Shop 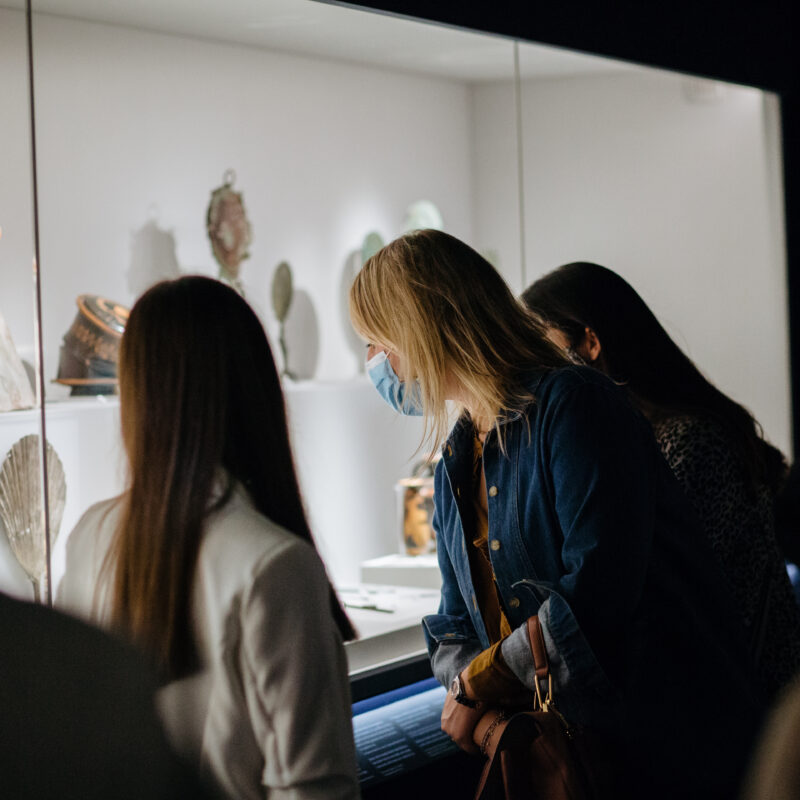 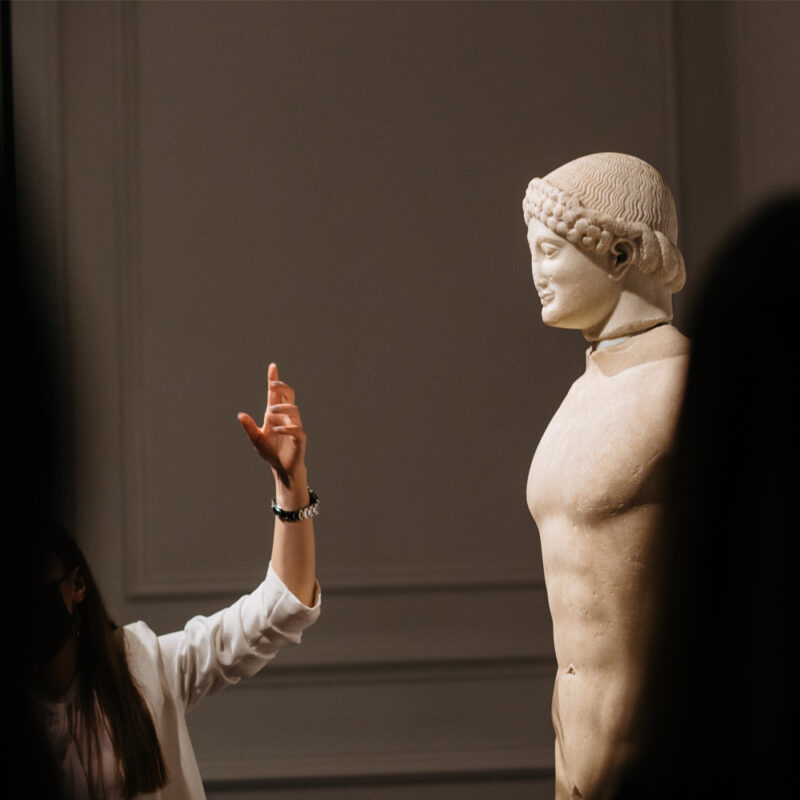 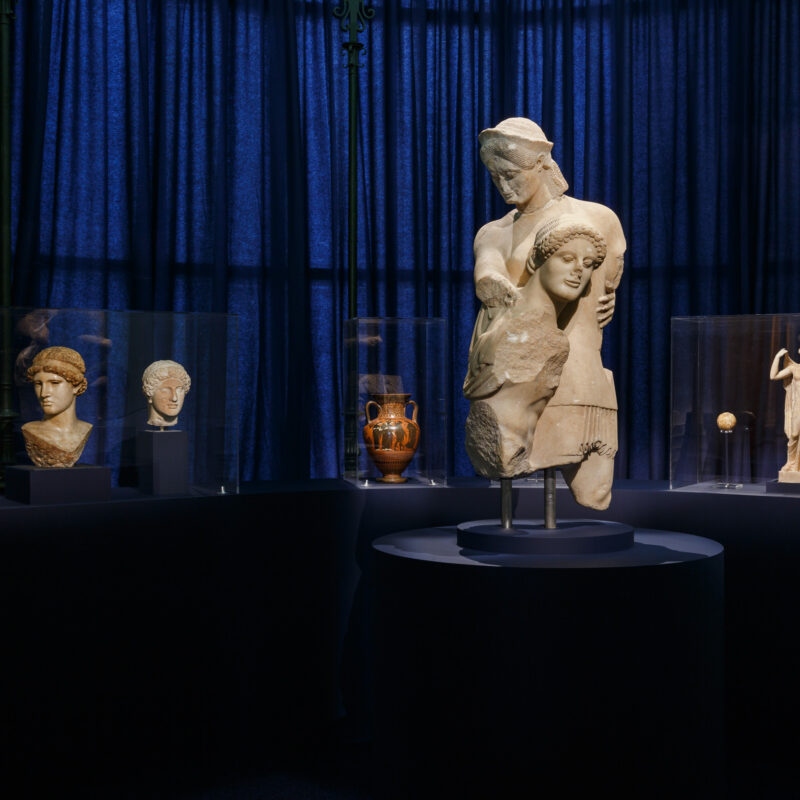 You can find out more about which cookies we are using or switch them off in settings.

This website uses cookies so that we can provide you with the best user experience possible. Cookie information is stored in your browser and performs functions such as recognising you when you return to our website and helping our team to understand which sections of the website you find most interesting and useful.

Strictly Necessary Cookie should be enabled at all times so that we can save your preferences for cookie settings.

If you disable this cookie, we will not be able to save your preferences. This means that every time you visit this website you will need to enable or disable cookies again.

This website uses Google Analytics to collect anonymous information such as the number of visitors to the site, and the most popular pages.
Keeping this cookie enabled helps us to improve our website.

Please enable Strictly Necessary Cookies first so that we can save your preferences!